Before we start today’s lesson I am going to emphasize as much as possible to PLAY and CREATE with these ideas and also to TAKE YOUR TIME.
Please remember: anytime you need to pause and digest the information PLEASE feel free to do so!
There is a lot of material we are going to cover, and if I’m being honest, I could make a video for each of these 11 ideas! And now without further delay:

The augmented scale aka whole tone scale, even though dreamy, is a subjective definition. I found that this is the way most musicians and non musicians might generally describe it. Whenever I want to make my dominant chords sound ultra dreamy I know this is the purest way of achieving that. And Since the augmented is a symmetrical scale based on whole tone Its inversions can be moved up in 2nds (2 frets) and In Maj3rds (4frets).

Now would probably be a good time to pause the video, pick up your guitar and try these ideas out!
We are arriving at the scale section of the Aug. chord structure at – 0:55 in the video – 1:15 (for the slowed down playthrough). You might have clued in as to what I am going to say: Play this idea & if you’re comfortable try shifting the scale in 2nds for an extra challenge!

So there it is! Eleven ideas I really dig about the augmented scale and arpeggio. I’ve always admired the sound and mysterious vibes that augmented passages provide. Please experiment with this idea: Where you place your accents, chromatic embellishment, switching intonation between two and three sets etc… you know what’s going on, get in on this jam and see where your augmented experiments can take you!

Have fun, keep on enjoying and please let me know what you’d like to hear about in the next article. 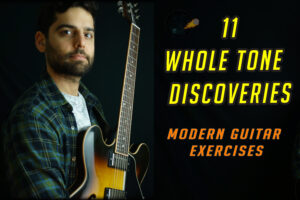 My online programs offer a wide range of knowledge and support.

Whether you are just starting out as an aspiring Guitar player or you have advanced skills – there is something here for you. 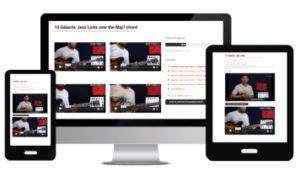 Eleven ideas I really dig about the augmented scale and arpeggio.

Be the first to start a conversation

Processing...
By continuing to browse the site you are agreeing to our use of cookies
WhatsApp us